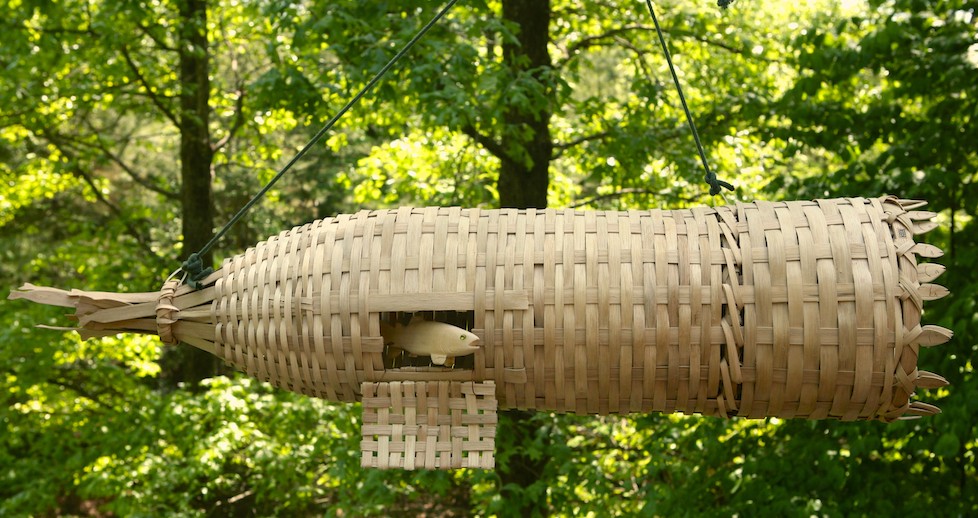 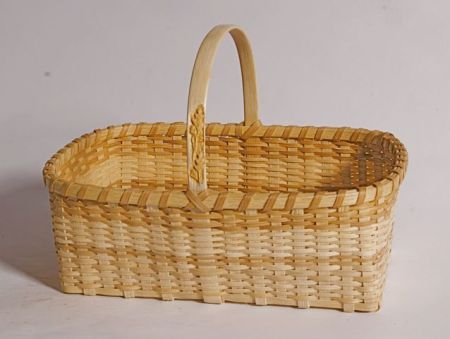 I’ve enjoyed the privilege of working before with Leona Waddell, a wonderful master basketmaker in Cecilia, KY, but this one was something special. It’s a small market basket, similar to larger versions Leona made some 50 years ago. Most of the white oak for it came from my property, but Leona pulled a few heartwood splits from her stash to add contrast to the weaving, and the result is what she judged to be “a cute little basket.” 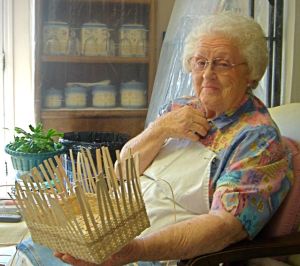 I split out the uprights and whittled the handle before we started. Then we worked for the better part of two days to weave the basket.

As always, I learned more of the finer points of basketry from Leona. Mostly, we just enjoyed being together to catch up on what life has woven of us since we last visited.

Best of all, Leona sent me home with a tin full of homemade fudge. On the long drive back to Alabama, I savored the treats and thought about how deeply I appreciate the opportunity to collaborate with such a great artisan. 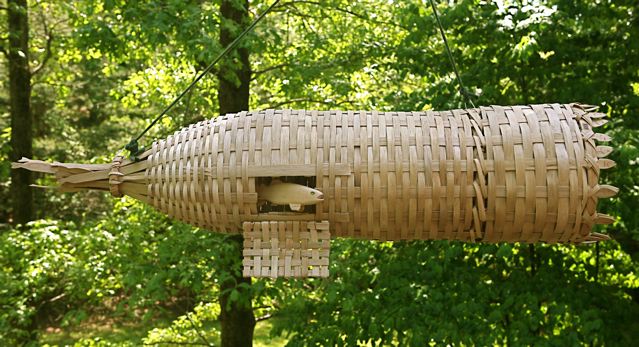 Here’s a white oak fish trap that was a boatload of fun to make. It’s a replica, with exception of carved heads and tails, of a trap made by old-time South Carolina basket weaver Elbert Brown that is part of the McKissick collection.

Thanks to the great staff at the McKissick in Columbia, SC for letting me closely study their assortment of fish traps.

Lessons from the Past 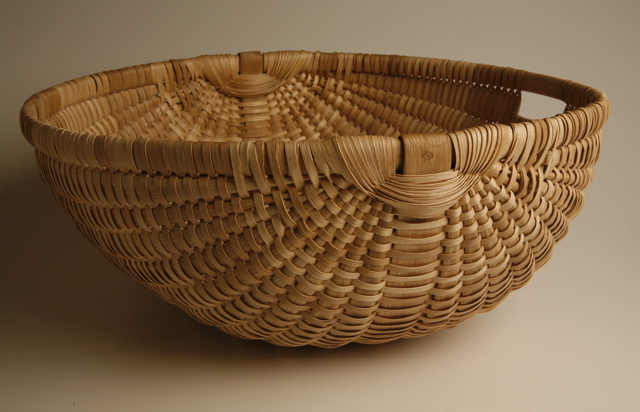 There are few basket makers who work with white oak.  It’s labor intensive—this basket required hand splitting the good part of two small oak trees—and most of those with the know-how are getting on in years.

Although I’ve been blessed to learn from several master basket makers, the teacher for this basket died long ago.  It’s an interpretation of a Pennsylvania field basket likely made in the late 19th century.  As I learned by trial and error how to carve, whittle and bend the big ribs of the basket you see here, I marveled at evidence of how the original was created by sure and confident hands.  And I felt perhaps some old boy was looking down on me from above, and smiling as I carried forward lessons from his work. 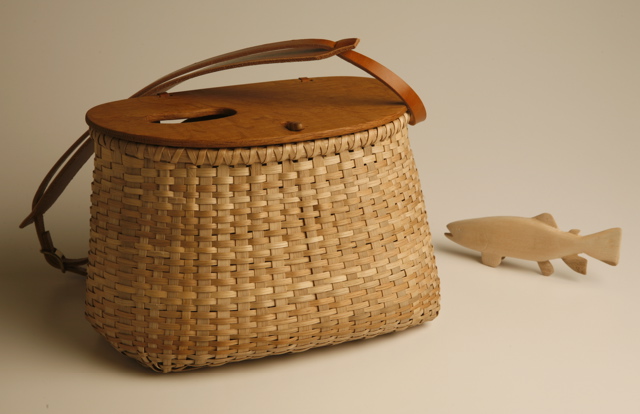 The basket shown is in the Smithsonian American Art Museum, a gift of Martha G. Ware and Steven R. Cole.

It’s made on a mold to maintain a perfect shape and will make a great complement to a fine bamboo fly rod. Or, as my cycling friends were keen to suggest, it makes a primo handlebar basket (without the lid).This is a popular basket that will make a wonderful and durable heirloom. 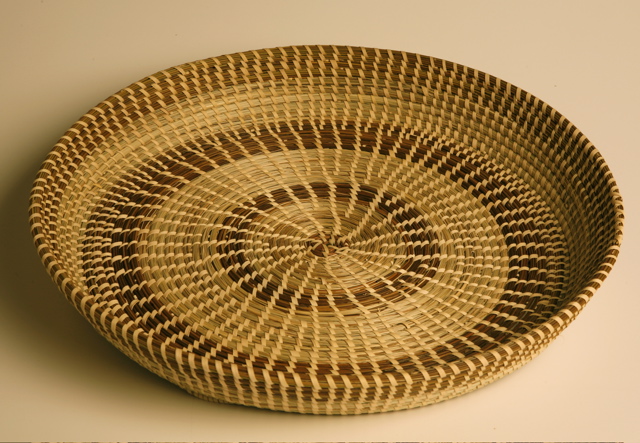 Some 15 years ago, I lived on an old wooden sailboat on the Stono River just south of Charleston, SC. Newly divorced and in need of healing, I sought out ways to connect with interesting people in this quietly beautiful and soulful place. And so I took up surfing, for which I never gained any proficiency, and sweetgrass basket making.

When I first arrived at the community center where basket maker Harriet Brown taught classes, mostly to suburban women, she seemed to hardly notice. Surely she thought I was in the wrong class or wouldn’t have the aptitude, since weaving with sweetgrass takes patience, a good eye, and nimble fingers. My first lopsided basket appeared to prove her right!

But I kept coming back, and coming back, and eventually Harriett took me seriously. She shared not only the rules of good basketry (“You’s got to feed the baby (row) to keep it growing steady”), but also stories of her own amazing life and that of her family, some of whom had woven baskets as slaves at the nearby Boone Hall Plantation in the 19th century. (The basket shown above is a decorative version of those originally used to winnow rice.)

Over the ensuing years, Harriet and I became very close, even after I moved away and began life in a new place. Sewing numerous baskets by her side, with her gentle encouragement and close scrutiny, I believe I mended my frayed heart and dreams, row upon row. 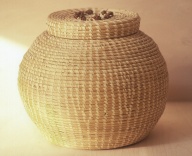 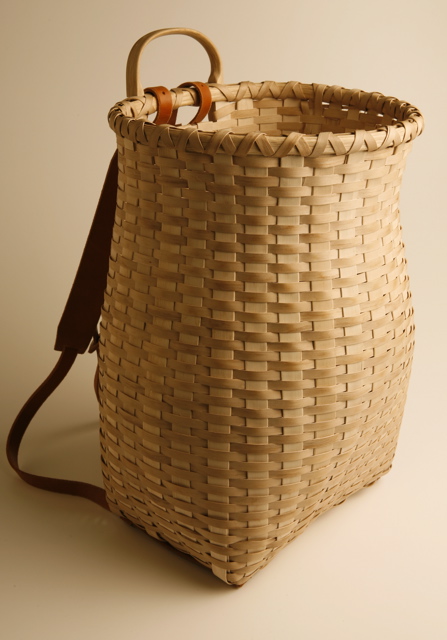 Woven from New Hampshire black ash with white oak rim and handle, this basket was a fun take on the traditional New England pack basket. It has a bit of flare from the belly to the rim that you typically don’t see in these baskets, but I wanted to give it a more sculpted shape.

New England black ash is the Lexus of split wood basket materials, as opposed to the Mac truck, contrary nature of Southern white oak with which I typically wrangle.

Special thanks to Jack Leadley (shown left) for tutoring me on his method of creating and attaching straps to the pack. Jack is an Adirondak renaissance woodsman who’s likely busy right now in his sugar shack making maple syrup.

Below is a much larger pack basket I made while working with renowned basket maker John McGuire. 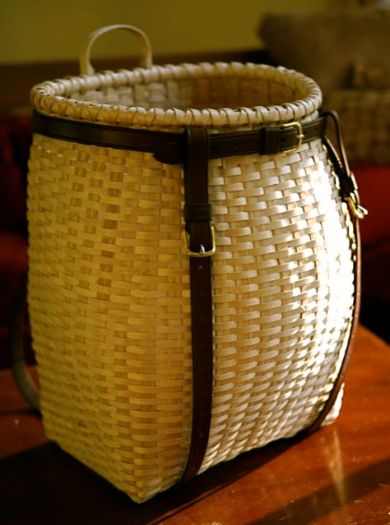